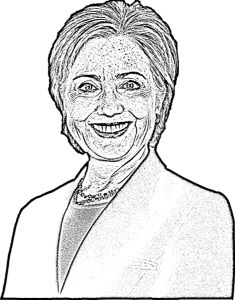 454 Comments Posted on May 6, 2017May 6, 2017 by Rutherford Politics, Social commentary, Wordpress Political Blogs

This will be a short post on a topic that shouldn’t need more discussion six months after the election. This week Hillary emerged from her safe space to once again blame FBI Director James Comey and the Russians for her defeat. Her claim is that Comey scared off the fence sitters.

First, the number of fence sitters was statistically insignificant. Hillary Clinton was one of the most polarizing candidates in American history. Folks loved her or hated her. Very few were ambivalent.

Second, the Electoral College proved valuable in disproving Hillary’s claim. If Comey and the Russians were such poison, how then did Clinton win the popular vote by 3 million? The brilliance of the Electoral College was that it pin pointed the source of Hillary’s problem. She didn’t give a damn about rust belt working class Americans and they knew it. Post nomination, not a single trip to Wisconsin, not a single one. And like Glenn Close, in Fatal Attraction, Americans don’t like being ignored.

To his political credit, good old red neck Bill Clinton reportedly told his wife that she wasn’t paying sufficient attention to rust belt whites. His warnings were drowned out by the elites surrounding Hillary.

Kudos to Amie Parnes and Jonathan Allen for co-authoring a book, “Shattered” that actually suggests the fault in Hillary’s campaign was not in the stars but in her campaign. The same campaign dysfunction that lost her the 2008 nomination killed her again.

Hillary needs to go away and shut up.

P.S. One of the classiest things George W. Bush did when he exited the White House was to go away and STFU. Barack, now it’s your turn. If America was that interested in your perspective, they would have selected your “inevitable successor”. They didn’t. Time for you to learn how to paint.

What do y’all think? The bar is open.