You know what they say about the insanity of repeating the same action over and over and expecting different results? Well when it comes to mass shootings, that’s what we do. Every time our thoughts and prayers are with the families of the dead and the injured survivors. And that basically is it. Nothing more.

My conservative readers like to mock the notion that “we have to do something”. That’s primarily because they suspect the something is gun control. They’re actually right that gun control won’t work because:

This doesn’t mean we can’t do anything. Sometimes you have to admit when you’ve lost the principled fight. This is, in all seriousness, the only option left:

Do I prefer this approach? Hell no! But we must face the fact that not long ago 20 innocent souls less than 7 years old were slaughtered and we did NOTHING.

It’s time to give the legislators what they want. It’s already too late to put the gun-genie back in the bottle. If we don’t take up arms against these radicals and other unstable gun owners, we will continue the current trend of one mass shooting (more than 3 killed at one incident) per day.

Or we can keep repeating the same response and expect a different outcome.

As we approach the four-month anniversary of the senseless slaughter at Sandy Hook Elementary School, there is much talk in the media about our tone-deaf Congress ignoring the 90% of the country that wants stricter background checks on gun buyers. Indeed, we hear lots of statistics pointing to a majority of Americans favoring restrictions on type of guns sold, and size of ammunition clips. The fault my friends is not in Congress but in ourselves.

When I was a kid, the evening news was full of coverage of protesters marching outside the White House over the Vietnam War. Who’s marching now? There are those who say the most effective thing a citizen can do is call his Congressman or Senator. I don’t buy it. Politicians respond to two stimuli: money and discomfort. Don’t get me wrong. I am not calling for violence. I’m calling for good old civil disobedience. If you’re tired of hearing about dead kids, whether it’s in the cushy CT suburbs or the inner city of Chicago, chain yourself to the nearest immovable object outside Congress and stay there. Do it until the press comes to cover it. Do it until the police arrest you, again with the TV cameras watching. The notion that you can drown out the NRA’s money with a phone call to your representative is pure nonsense.

I might be accused of being the pot calling the kettle black. I’ve never protested in my life and probably never will. It’s just not where my abilities and talents are best invested. However, I associate myself with the liberal cause because I support those who DO have it in them to protest for change.

Our current predicament only highlights what nonsense Occupy Wall Street was. Yes I’m doing an about-face on that topic because a bunch of liberals camped out in a NYC park to protest “unfairness”. We’re great about belly aching about a concept but when it comes to taking decisive action on a specific topic like dead kids, nobody is camping out anywhere.

Getting back to the Vietnam war for a moment — back then we didn’t employ the cowardly combat method of sending remote control planes to bomb our enemies into kingdom come. Now, we kill enemy and innocent alike with no risk to our own men. Now we drop a bomb on a teenager because he had the misfortune of having a traitor for a father. Where are the protesters? When Senator Rand Paul recently asked the White House whether they felt emboldened to drone-attack American citizens on American soil, he got a hypothetical yes from Attorney General Eric Holder. Only after Paul pulled off the grand old tradition of a true stand-up filibuster did the White House back off a bit. And what did we hear in the media? Nothing to see here because Obama is a nice guy who would never abuse such powers. Fortunately there were those who, like Senator Paul, pointed out that we must control the office, not the man. Obama could go crazy. Obama’s successor could be a nut job. When you enable the office, you give powers to the man holding that office.

What does it say about the liberal cause that it took a Republican, Rand Paul, to take serious issue with our drone policy?

Maybe I’m being too hard on Liberals? Perhaps the Internet has become a proxy for real protest? Whereas the Arab Spring was punctuated by social media being a driving force for communication AND organization, here in the States, we “like” some post on Facebook and think that we have made a difference. Have we been lulled into thinking electronic protest can match the power of the NRA’s money or the strength of the military industrial complex?

Have we become too cute and clever by half? Last night Dana Milbank of the Washington Post wrote about the changing face of protest. He cited an “eat-in” outside the FDA where protesters brought and consumed a huge vat of soup to protest the FDA not demanding labeling of GMO’s in foods. Milbank argues that these folks are opting for persuasion over confrontation. I am left scratching my head. How effective is quaint persuasion with politicians whose pockets are lined with money from the food manufacturers? How effective is gun control “persuasion” with politicians whose pockets are lined with gun money? 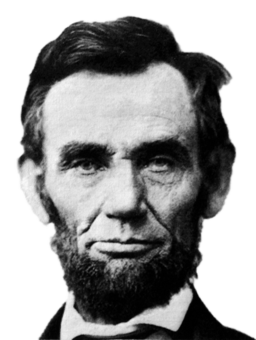 I’m taking a break from spouting off my opinion (well, at least until the comments section) this week to ask a philosophical/political question of my readers.

When it comes to Iraq, Iran, Egypt, Libya and Syria we are famous for supporting civil unrest against cruel leaders. We view self-determination as a great American virtue. We believe in government governing with the consent of the governed. So why didn’t we simply let the Confederacy exist?

I clearly don’t support slavery even if we remove the racist element and simply justify it as a means to a commercial end. Still the Southern states felt abused and oppressed by the Northern states and by Washington in general.

In James Buchanan’s wiki biography it states that he felt it was illegal for the Southern states to secede but it was illegal for the US to stop them. Therefore he left a disintegrating country to his successor, Abraham Lincoln. What kind of history would we have had if we simply let secession happen? Could we have existed as two separate countries, the United States and the Confederate States? Like East and West Germany, might we have eventually merged back together of our own volition without all the bloodshed of the civil war?

These thoughts occur to me as I look at the seemingly incurable polarization in modern society. Ignoring California, which in many ways is just a sociopolitical twin of the Northeast, many of our conflicts seem to split East/West and North/South based on cultural differences. The most striking is the latest debate on gun control where some of the most vociferous voices against control come from the South and West and the cry for greater control comes from the North and the East.

Was Lincoln and by extension, the United States, hypocritical not to let the South have the government they wanted back in 1861? What do you think?