It’s one thing to argue about politics but things have gone completely awry when we cannot agree on basic mathematics. Such was the case late last week on MSNBC’s “Morning Joe” when the two co-hosts, Joe Scarborough and Mika Brzezinski got into a heated discussion about raising taxes on the very rich.

This was not your typical argument with the liberal (Mika) saying the current tax system was unfair and the conservative (Joe) saying that the rich pay more than their fair share. No, this argument was about a much more fundamental concept that for reasons that evade me, Mika just couldn’t grok. Joe Scarborough said that before you raise the taxes of the rich one dime you first have to close loopholes. Mika saw this as some distraction from getting that extra ounce of blood out of the “1%”.

Look folks, this ain’t rocket science. If for every tax hike you have a corresponding effort by creative attorneys and accountants to evade the tax hike, then you’ve wasted your effort. The simple truth is  that by closing loopholes, you automatically bring in more revenue without ever raising taxes one cent. The problem, as evidenced in the Mika/Joe debate is that closing loopholes doesn’t provide that catharsis that “punishing the rich” with a tax hike provides. But what good is catharsis for the sake of catharsis? It might make you feel good but it doesn’t solve the problem. On this one, Joe is absolutely right. You simplify the tax code first by closing loopholes. Then and only then do you consider which rates need to be raised.

If the bucket has a hole in it, it doesn’t matter how much water you pour in. 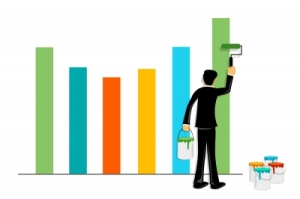 There has been much talk lately about the unfair distribution of wealth in the United States of America. It is the fundamental lament of the Occupy Wall Street movement. The other day I was looking at some graphs illustrating this “unfair distribution” and it occurred to me that one area of dispute may revolve around definitions. Distribution as it applies to our current problem is a statistical concept. It’s a phenomenon mapped out on an x and y-axis. Yet when we get into a political discussion about it I think another strange perspective kicks in. It is almost as though we view that there is some huge pot of money and some grand poobah decides who gets what share of the pot. This evil overlord “distributes” the money in such a way that 1% get most of it and 99% see very little of it. Our current national dialogue centers around everybody getting “their fair share”, again as though there is some central fund from which to divvy out the riches.

That definition of distribution not only leads to class warfare, it makes it impossible to diagnose the problem. The distribution problem comes down to two factors, lack of employment and skewed valuation of the jobs that do exist. Since those who hire typically make more than those who are hired, high unemployment immediately funnels wealth to a small minority. Yet even if we had 4% unemployment (probably a best case scenario) we would see skewed distribution due to the way jobs are valued. Is Madonna really more important in your life than your child’s teacher or your gardener? Yet neither of those folks could ever hope to attain Madonna’s wealth. Is a hedge fund manager really more valuable to society than a fireman?

So the first step to leveling wealth distribution is getting as many folks employed as possible. Quite frankly, if you don’t work you don’t deserve remuneration. There isn’t some central pot from which you get to have your fair share. Income is a trade of money for services. As a liberal I do believe it is society’s obligation to provide training opportunities so all those willing to work can do so.

The second step to leveling wealth distribution is to reconsider how we compensate for various jobs. This does not mean taking money away from the very rich. It simply means paying teachers, firemen, policemen, and yes even the gardener, a little bit more. This second step is actually the harder nut to crack because it cuts to the value system each of us applies to various forms of work. One of the reasons we have such a problem with illegal immigration is that illegal immigrants are willing to do work the average American considers “beneath” him. The current distribution of wealth is more  a reflection of our collective value system than it is any segment “stealing” more than their fair share.

There is no doubt that the behavior of the financial sector in recent years has been reprehensible. But we are kidding ourselves when we lay all the blame at their doorstep. By perpetuating our value system, the 99% play a large role in keeping the 1% where they are.

324 thoughts on “You Cannot Fill a Leaky Bucket”